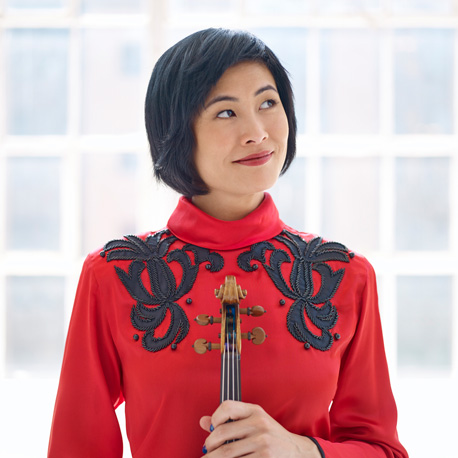 Recognized for intense, commanding performances, delivered with dazzling virtuosity and technical assurance, violinist Jennifer Koh is a forward-thinking artist dedicated to exploring a broad and eclectic repertoire, while promoting equity and inclusivity in classical music. She has expanded the contemporary violin repertoire through a wide range of commissioning projects and has premiered more than 100 works written especially for her. Her quest for the new and unusual, sense of endless curiosity, and ability to lead and inspire a host of multidisciplinary collaborators, truly set her apart.

Her critically acclaimed works include Alone Together, Bach and Beyond, The New American Concerto, Limitless, Bridge to Beethoven, and Shared Madness. Coming this season to Carnegie’s Zankel Hall, the Kennedy Center, and Cincinnati’s Music Hall, The New American Concerto is Ms. Koh’s ongoing, multi-season commissioning project that explores the form of the violin concerto and its potential for artistic engagement with contemporary societal concerns and issues through commissions from a diverse collective of composers. In February and March 2022, she premieres Missy Mazzoli’s Violin Concerto with the National Symphony Orchestra conducted by Gemma New at the Kennedy Center and with the Cincinnati Symphony Orchestra conducted by Louis Langrée at Music Hall. Ms. Mazzoli’s concerto is the sixth to have been commissioned as part of the project, and Ms. Koh premieres the work having earlier in the season performed solo and chamber music by Ms. Mazzoli in San Francisco alongside the composer herself. Also in March 2022, Mr. Koh gives the New York premiere of Lisa Bielawa’s violin concerto Sanctuary at Carnegie’s Zankel Hall with the American Composers Orchestra. Originally premiered in 2020 with co-commissioner the Orlando Philharmonic, the concerto explores the meaning of the word “sanctuary”—which holds new prominence and resonance in our current cultural climate—in order to reach a greater understanding of its layered meaning within American consciousness. Additional New American Concerto commissions are Tyshawn Sorey’s For Marcos Balter, premiered with the Detroit Symphony Orchestra in 2020; Courtney Bryan’s Syzygy, premiered with the Chicago Sinfonietta in 2020; Christopher Cerrone’s Breaks and Breaks, premiered with the Detroit Symphony Orchestra in 2018; and Vijay Iyer’s Trouble premiered at the 2017 Ojai Music Festival.

In addition to continuing her existing projects, Ms. Koh unveils two new collaborations this season—Everything Rises with bass-baritone Davóne Tines and Bach 6 Solo with director Robert Wilson and choreographer Lucinda Childs. Everything Rises, whose premiere performances are presented by UCLA and UC Santa Barbara in April 2022, is an evening-length musico-theatrical experience borne of Ms. Koh’s and Mr. Tines’s own experiences as artists of color in a culture dominated by whiteness. Their collective exploration led them back to their family histories—to the stories of Ms. Koh’s mother, Gertrude Soonja Lee Koh, a refugee from North Korea during the Korean War, and Mr. Tines’s grandmother, Alma Lee Gibbs Tines, who holds vivid memories of anti-Black discrimination and violence dating back many years. These experiences—of the artists and their families—are both the inspiration for and subject matter of this project. Furthermore, during the years in which Everything Rises has been in development, there has been a new surge of activism against racist violence targeting Black and Asian Americans. Inspired by the recent outpouring of support and solidarity across racial identities, this new work proposes a united front through music.

In September 2021, nearly a decade after collaborating in revival performances of Philip Glass’s Einstein on the Beach, Ms. Koh reunites with director Robert Wilson and choreographer Lucinda Childs for a new work, Bach 6 Solo, that brings to life Bach’s sonatas and partitas with theatrical elements and dance. Conceived by Ms. Koh and Mr. Wilson, the new work has Ms. Koh performing all six of Bach’s Partitas and Sonatas—widely considered the pinnacle of solo violin writing and typically performed alone on stage—with four dancers performing choreography by Ms. Childs. Performances take place at the Chapelle Saint-Louis de la Salpêtrière as part of the Festival d’Automne à Paris. Ms. Koh also performs selected Bach sonatas and partitas in Boston and Schenectady this season.

Additional highlights of Ms. Koh’s 2021–22 season are two new recordings on Cedille Records: Alone Together and the complete box set of her Bach & Beyond trilogy. Originally launched as a commissioning project and virtual performance series, Alone Together was developed in response to the coronavirus pandemic and the financial hardship it placed on many in the arts community. The project brought composers together in support of the many freelancers among them—with the more established composers each donating a new micro-work for solo violin, while also recommending a fellow freelance composer to write their own solo violin micro-work on paid commission from Ms. Koh’s artist-driven nonprofit ARCO Collaborative. The new album, released in August 2021, features 39 world-premiere recordings, including works by Du Yun, George Lewis, Tania Léon, Andrew Norman, Missy Mazzoli, Ellen Reid, Vijay Iyer, Nina C. Young, and Angélica Negrón. The reopening of concert halls around the U.S. has also allowed Ms. Koh to perform Alone Together recitals in-person for live audiences, with 2021–22 performances including recitals at the University of Notre Dame and as part of a teaching residency at Seoul National University.

Ms. Koh’s Bach & Beyond recording series was originally released by Cedille Records in three installments (2012, 2015, and 2020), which are released as a three-disc box set in September 2021. These recordings explore the history of the solo violin repertoire from Bach’s Six Sonatas and Partitas to the music of 20th- and 21st-century composers, including new commissions from Missy Mazzoli (Dissolve, O My Heart) and John Harbison (For Violin Alone). The collection also includes the world-premiere recording of Kaija Saariaho’s Frises, as well as works by Berio, Bartók, and Ysaÿe. Ms. Koh first launched Bach & Beyond as a three-part recital series in 2009, and she continues to perform these programs regularly, including this season at UMass Amherst. These performances and the three recordings have received widespread critical acclaim, with the Chicago Tribune describing the recordings as an “epic traversal of solo violin repertoire” and “a monumental achievement.”

Ms. Koh also continues to perform music from her Bridge to Beethoven project—launched in collaboration with her frequent recital partner Shai Wosner in 2015—which pairs Beethoven’s violin sonatas with new and recent works inspired by them in order to explore the composer’s impact and significance on a diverse group of musicians. This season’s Bridge to Beethoven concerts take place in Philadelphia and Princeton with pianist Thomas Sauer.

An advocate for music from our current millennium, she has performed Anna Clyne’s The Seamstress with the BBC Symphony, led by Sakari Oramo; Esa-Pekka Salonen’s Violin Concerto with the Houston Symphony, led by Christoph Eschenbach; and Steven Mackey’s Beautiful Passing with the Baltimore Symphony, under Marin Alsop.

Ms. Koh played the role of Einstein in the revival of Philip Glass and Robert Wilson’s Einstein on the Beach from 2012 to 2014, and a particular highlight of her career was performing with St Vincent (Annie Clark) and S. Epatha Merkerson at the 2018 Kennedy Center Honors in a tribute to Mr. Glass. She has also performed for former First Lady of the United States Michelle Obama and former First Lady of South Korea Kim Yoon-ok in 2011.

Ms. Koh brings the same sense of adventure and brilliant musicianship to her recordings as she does to her live performances. She has recorded more than a dozen albums with Chicago-based Cedille Records. In addition to the above, her recordings for the label in recent years include 2019’s Limitless, on which leading composer-performers—including Lisa Bielawa, Vijay Iyer, Missy Mazzoli, Qasim Naqvi, Tyshawn Sorey, Wang Lu, Nina C. Young, and Du Yun—perform duo compositions with Ms. Koh that explore the artistic relationship between composer and performer, and a 2018 collection of works by Kaija Saariaho, whose music she has long championed and with whom she has closely collaborated. Titled Saariaho X Koh, the album includes the chamber version of the violin concerto Graal Théâtre with the Curtis Chamber Orchestra; Cloud Trio with violist Hsin-Yun Huang and cellist Wilhelmina Smith; Tocar with pianist Nicolas Hodges; Aure with cellist Anssi Karttunen, with whom she premiered the violin and cello version in 2015; and Light and Matter with both Mr. Hodges and Mr. Karttunen, with whom she performed the French premiere in 2017.

Ms. Koh is active not only in the concert hall and recording studio, but also as a lecturer and teacher. She has been on faculty at the Mannes School of Music since 2018 and has held residencies at Brown, Cornell, Duke, and Tulane Universities, as well as at the Curtis Institute of Music, Oberlin Conservatory and College, and University of California, Santa Barbara. She was the keynote speaker for the Royal College of Music’s 2020 “Orchestrating Isolation” conference and the League of American Orchestras’ 2018 annual conference.

She is the Founder and Artistic Director of ARCO Collaborative, an artist-driven nonprofit that advocates for inclusivity in classical music. Established in 2014, ARCO Collaborative commissions, develops, and produces new musical works that highlight artists of color and women composers in collaborations that bring forth stories previously unheard in Western art forms. She is also a member of Composers Now’s Distinguished Mentors Council and the board of the League of American Orchestras.

Born in Chicago of Korean parents, Ms. Koh began playing the violin by chance, choosing the instrument in a Suzuki-method program only because spaces for cello and piano had been filled. She made her debut with the Chicago Symphony Orchestra at age 11. She was Musical America’s 2016 Instrumentalist of the Year and has also been recently recognized as a Virtuoso Award honoree by Concert Artists Guild in 2020 and “A Force of Nature” by the American Composers Orchestra in 2019. She was a top prize winner at Moscow’s International Tchaikovsky Competition, winner of the Concert Artists Guild Competition, and a recipient of an Avery Fisher Career Grant. She has a Bachelor of Arts degree in English literature from Oberlin College and studied at the Curtis Institute, where she worked extensively with Jaime Laredo and Felix Galimir.