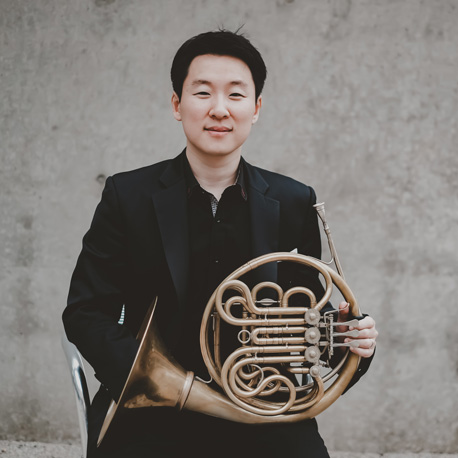 Born in South Korea and raised in Hawaii, Young Kim was exposed to music at an early age. Starting the violin at four and piano at six, he still went onto study the trumpet and the flute before finally settling on the French horn in middle school.

He has also performed as a guest musician with the Colorado, Hawaii, Houston, Memphis, Naples, Omaha, and San Antonio Symphonies as well as touring with the Toronto Symphony Orchestra. Summer of 2016 marked a special occasion as he got to perform for the first time in his home country with the Seoul Philharmonic Orchestra, and in 2018, Young won an audition for the St. Louis Symphony Orchestra’s Assistant/Utility Horn position.

A passionate educator, Young started creating educational content for the Korean horn community in early 2019. These contents, marked #HornTip (#호른팁), are essays, translations of pedagogy materials, and YouTube videos that discuss a wide range of topics. Efforts continue not only to provide new contents but also to make English translations and subtitles for a global audience.

After two seasons in St. Louis, Young has moved to join his family in Aurora, Colorado and is enjoying a diverse career in both performance and education.