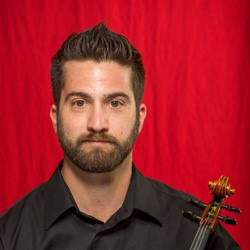 Chris Tantillo, a native of Long Island, New York, began playing the violin at the age of seven. He switched to viola while attending the Interlochen Arts Academy, where he completed his high school degree, studying with David Holland. Tantillo received his Bachelor’s of Music degree from the Cleveland Institute of Music, where he studied with Stanley Konopka, and continued his graduate studies with Robert Vernon. Tantillo joined the viola section of the St. Louis Symphony Orchestra in 2006. Prior to that, he performed with the San Diego Symphony and the New World Symphony, in Miami Beach, FL. He enjoys performing chamber music and frequently collaborates with The Chamber Music Society of Saint Louis as well as The Ariel Concert Series, The Missouri Chamber Music Festival, and The Bach Society of Saint Louis. He maintains a large teaching studio, and has had students go on to study viola performance at the Cleveland Institute of Music, the Eastman School of Music, and the University of Michigan, among others.