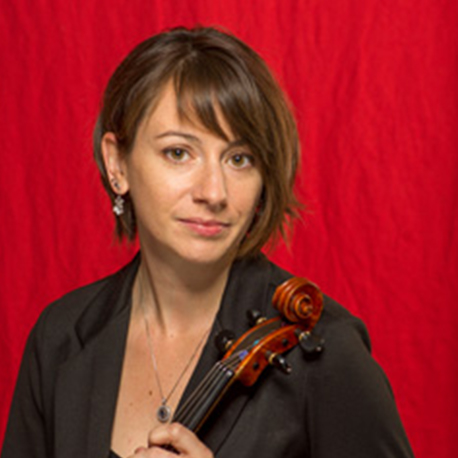 Shannon Williams lived in several places throughout her childhood but calls Wisconsin, where she spent the most time, her home state.  She began playing the violin at the age of five after seeing Itzhak Perlman on Sesame Street and by age seven, had dreams of becoming a member of the Green Bay Symphony.  Sadly, that dream was never realized, though she was quite happy to join the viola section of the St. Louis Symphony Orchestra in 2005, David Robertson’s inaugural season as Music Director.

While in high school, she studied violin with the great pedagogue, Mimi Zweig, and was concertmaster of the Milwaukee Youth Symphony Orchestra.  Gently persuaded by Zweig, Williams gave the viola a try in a chamber music setting.  She and some fellow Milwaukee musicians formed what became known as the Dubinsky Quartet, named after Rostislav Dubinsky, an early mentor of theirs and the founder of the Borodin Quartet.  The group went on to win several competitions and accolades, including the junior division of the Fischoff Competition and Indiana University’s Kuttner Quartet competition.  In 1999, they were one of ten chamber groups worldwide invited to participate in Australia’s prestigious Melbourne Chamber Music Competition and were also prizewinners in California’s Coleman Competition.

Williams began her undergraduate studies as a violin student of Miriam Fried at Indiana University but ultimately decided the viola was her true voice, at which point she began studying with Atar Arad and received her Bachelor’s degree in viola performance.  She then went to the New England Conservatory where she received her Master’s Degree under the tutelage of Martha Katz.

Williams remains an avid chamber musician as a member of the SLSO, performing regularly as a trio with violinist Kristin Ahlstrom and cellist Bjorn Ranheim, and is always eager to tackle the challenging modern repertoire performed at the SLSO’s Live at the Pulitzer series.  She has also been a featured soloist with the SLSO, as a competition winner at Indiana University, and at the Colorado Music Festival, where she spent several summers as their principal viola.

She is also a wife and a mother to three beautiful, rambunctious children. She enjoys hiking, biking and relaxing with a giant glass of wine at the end of another crazy day.