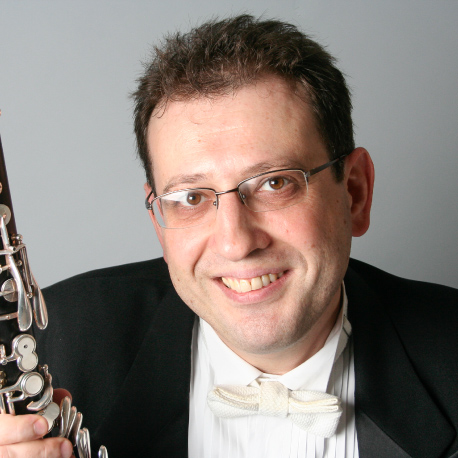 Sasha Potiomkin has been appointed by Maestro Hans Graf as a bass clarinetist and a clarinetist with the Houston Symphony in 2012, holding a Tassie and Constantine S. Nicandros endowed chair. Much in demand as an orchestral musician, Sasha has performed as a guest artist with The Cleveland Orchestra ( including 2016 European Tour and 2018 Centennial Gala Concert, televised on PBS Great Performances series New York Philharmonic, Saint Louis Symphony, Cincinnati Symphony, Chicago Symphony, Israel Philharmonic and as a guest Principal Clarinetist with the Kansas City Symphony and Alabama Symphony ( including ASO Carnegie Hall performance in 2012). As a soloist, Sasha has given recitals in his native Ukraine, Israel and throughout US. He also appeared as a soloist with Tel Aviv Symphony, Israel Camerata, Brooklyn Philharmonic, Houston Chamber Orchestra and Orchestra X Houston, under direction of Itay Talgam, Lucas Foss and John Axelrod. The most recent performances were the World Premieres of ” Twitch” by Nathan Daughtrey for Solo Clarinet and wind ensemble at 2016 Chicago Midwest Conference and ” The Nail” by Robert Smith for Clarinet, Piano and bass trombone, performed at the 2017 Texas Music Festival. As a dedicated teacher, Sasha has influenced hundreds of young clarinetists in Texas and around US, giving master classes at Rice University, University of Houston, University of Florida, Cincinnati Conservatory, University of Maryland, Peabody Institute and Buffet Group Showroom in New York City. He was also invited by the current HSO Music Director Andrés Orosco-Estrada to teach a week residence with the Colombian Youth Orchestra in Santa Marta, Colombia. He has participated in Tanglewood, Blossom and Bellingham Music festivals. His main teachers were David Weber and David Peck and additional studies with Yehuda Gilad, Mark Nuccio and Michael Wayne. Sasha is a Buffet Group and D’Addario artist and clinician.