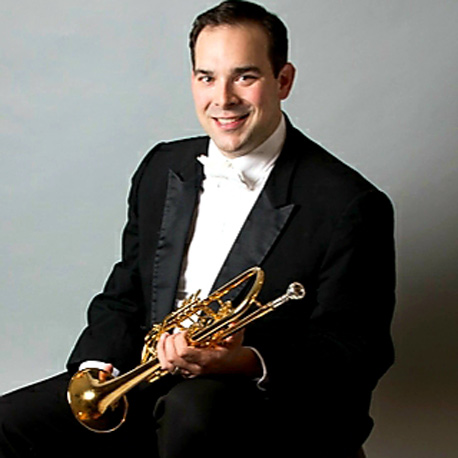 Richard Harris joined the Houston Symphony as second trumpet in 2018. Previously, he was a member of the Charlotte Symphony Orchestra where he performed for 8 years. In March of 2018, Harris gained the distinction of being the only musician in an American orchestra to have won auditions for each position in one orchestral trumpet section.

He achieved this notable accomplishment during his tenure at the Charlotte Symphony Orchestra where he won nationally held blind auditions for the positions of Second Trumpet (2009), Associate Principal / 3rd Trumpet (2014) and Principal Trumpet (2018). As a soloist, Harris has performed J.S. Bach’s Brandenburg Concerto no. 2, Copland’s Quiet City, and Concerti by Vivalidi, Hummel, Haydn, and Neruda. A Conn-Selmer Performing Artist, he has enjoyed performing in orchestras all over the world including the Seoul Philharmonic in South Korea and the Jalisco Philharmonic in Guadalajara, Mexico. Recently he served as guest 2nd trumpet with the Pittsburgh Symphony Orchestra. He has also performed with the Dallas Symphony Orchestra, Kansas City Symphony, as well as many others.

An avid educator, Harris has given masterclasses at universities and high schools across the country. He served on the faculty at Winthrop University from 2013–2018 and at UNC Charlotte from 2007–2009, and is currently Visiting Assistant Professor of Trumpet at Texas Tech University. He also had the privilege of serving as the brass coach for the Charlotte Symphony Youth Orchestra for 7 years. Harris’ students have enjoyed successful auditions for orchestras, wind ensembles, and prestigious programs of study.
In addition to his passion for playing trumpet, Harris is a chess enthusiast. His volunteer work with inner-city schools in Charlotte allowed him to teach and run chess camps for underprivileged kids. As a master level chess player, he uses this game as a teaching tool to foster a sense of patience, sportsmanship, strategic thinking, and calm under pressure.

Harris has studied with Thomas Booth, Barbara Butler, and many others. His degrees from Texas Tech University and Southern Methodist University (SMU) gave him a strong foundation. While a student at SMU he had the honor of playing two seasons with the National Repertory Orchestra. During his time at SMU he was hailed by the Dallas Observer as “a dream of a principal trumpet player.” Also, while a student at Texas Tech he won the concerto competition. He performed the Haydn Concerto at the Las Vegas Music Festival in 2003 as an invited soloist.

Harris was born in Lander, Wyoming as the youngest of five siblings. Originally, he began his musical studies at age 5 on the cello. At age 8, he discovered his lifelong passion as he also began studying the trumpet. When he was given his first trumpet he felt instantly that it was the instrument he couldn’t put down.
In 2013, he met his wife, Angela, and they have two children between them, Edward and Eva.