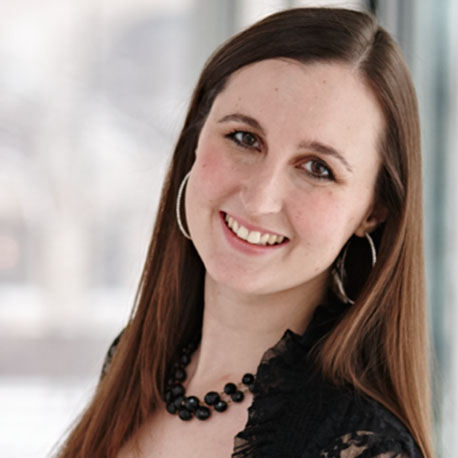 Rebecca Corruccini joined the Minnesota Orchestra’s first violin section in 2008. She served as acting assistant concertmaster from 2014-15, then acting associate principal second for 2015-16. Before assuming her Minnesota post, she performed two seasons with the Houston Symphony, and has also recorded Emmy award-winning PBS All-Star Orchestra episodes as a charter member of the first violin section.

Corruccini has appeared as guest concertmaster of the Louisiana Philharmonic and Philharmonia Mexico, and as guest associate principal second violin with the Baltimore Symphony. From 2010 to 2014 she was concertmaster of the Bloomington Symphony Orchestra, and with that ensemble she was featured as soloist in Shostakovich’s First Violin Concerto, Mendelssohn’s Violin Concerto, Mozart’s Fifth Violin Concerto, and Vaughan Williams’ The Lark Ascending. She has also appeared as soloist in Sarasate’s Zigeunerweisen as well as the Berg and Stravinsky violin concertos. In another solo roles, Corruccini was featured in a recital at the Kennedy Center’s Terrace Theater. Most recently, she performed the Beethoven concerto with the Oneota Valley Community Orchestra.

Corruccini has been featured in both chamber music and orchestral performances at festivals across the country, including the Colorado Music Festival, where as assistant concertmaster she performed Anders Koppel’s Tarentella with percussion soloist Colin Currie. A member of the Sun Valley Music Festival since 2007, she has also served as a member of the Grand Teton Music Festival orchestra and the Mainly Mozart Festival, and as faculty at the Brevard Music Center.

Corruccini earned a Bachelor of Music degree with honors at the Cleveland Institute of Music, studying with William Preucil. She received a master’s degree from Rice University’s Shepherd School of Music, where her teacher was Kathleen Winkler. A teacher herself since the age of 12, Corruccini particularly enjoys teaching adult amateurs as well as coaching individuals preparing for auditions. Her non-musical passions include the environment and animals, especially Sunshine, her rescue dog.