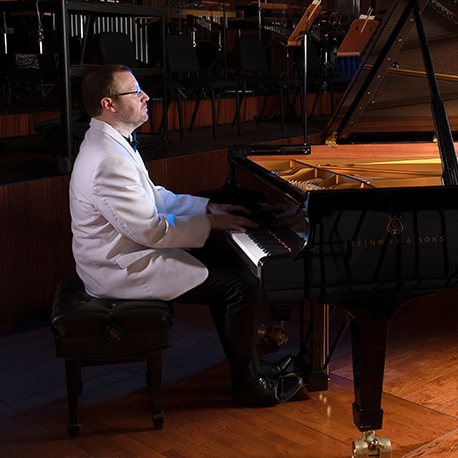 A versatile pianist, Peter Henderson is active as a performer in solo, chamber and orchestral settings. Henderson is currently Associate Professor of Music and Artist-in-Residence at Maryville University, where he has served on the faculty since 2005. He performs frequently as an ensemble keyboardist with the St. Louis Symphony, and made his debut as a subscription concert soloist with the Symphony in January 2008. During January and February 2016, Henderson was the piano soloist in the St. Louis Symphony’s subscription concert and California tour performances of Oliver Messiaen’s Des Canyons aux étoiles…. Critics described him as a “powerhouse soloist” (San Francisco Chronicle) and praised his Messiaen playing for its “intense focus and thrilling vibrancy” (San Jose Mercury News). In addition to his keyboard playing with the St. Louis Symphony, he occasionally gives pre-concert lectures from the Symphony’s Powell Hall stage, introducing subscription concert programs.

Henderson is an advocate of new music, having given several premieres of solo piano and chamber works. In recent years, he has programmed solo recitals exploring focused repertoire: during the 2011-12 season, he performed the 32 piano sonatas of Beethoven; in November and December 2012, he presented the complete piano works of Debussy; and in November 2013, he played Chopin’s 27 Études in a single concert. Henderson’s discography includes collaborations with violinist David Halen, flutist Mark Sparks, violist Jonathan Vinocour, bass trombonist Gerry Pagano, and soprano Marlissa Hudson.

Henderson holds the degree Doctor of Music from Indiana University, Bloomington.  He and his wife Kristin Ahlstrom, a Sun Valley Music Festival violinist, live in St. Louis with their lively, sweet beagle/terrier-mix Zinni.