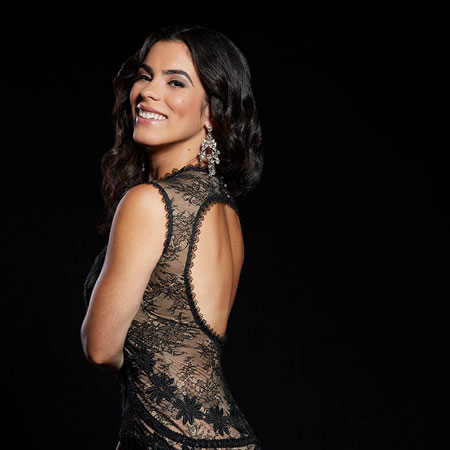 Puerto Rican soprano Meechot Marrero, whom El Nuevo Día called, “a revelation…a young Puerto Rican star with a great career ahead” is a member of the Deutsche Oper Berlin ensemble. Last season, she was featured in several role debuts as Nannetta in Falstaff, Biancofiore in a new production of Francesca da Rimini by Christof Loy, Musetta in La Bohème, Tebaldo in Don Carlo, and Cherubino in Le nozze di Figaro, as well as a return to Papagena in Die Zauberflöte, Frasquita in Carmen, Bianca in La Rondine, and Liù in Turandot.

In seasons prior, she appeared at the Deutsche Oper Berlin, performing Liù in Turandot, Micäela in Carmen, Adele in Die Fledermaus, Papagena in Die Zauberflöte, Jano in Jenufa, and debuted the role of Oscar in Un ballo in maschera. Outside of the Deutsche Oper, Ms. Marrero reprised Cunegonde in Candide at the Komische Oper Berlin, Heitor Villa-Lobos’ Bachianas Brasileiras No. 5 with the San Antonio Symphony, and Carmina Burana with Donald Runnicles and the Atlanta Symphony and Grand Teton Music Festival. She also made her role and house debut as Cunegonde at the Komische Oper Berlin in Barrie Kosky’s new production, as well as at the Hessisches Staatstheater Wiesbaden, and has appeared as Maria in West Side Story with the Grand Teton Music Festival and the Puerto Rico Symphony, among others.

Ms. Marrero has performed extensively in her home country of Puerto Rico. She was the recipient of the Career Bridges grant from the Schuyler Foundation and the Phyllis Curtin Career Entry Prize from the Yale School of Music. She began her musical studies with the San Juan Children’s Choir, and, after studying molecular biology at the University of Puerto Rico, completed a Bachelor of Music from the Puerto Rico Music Conservatory (where she graduated as the Valedictorian of her class) and a Master of Music from Yale Opera at the Yale School of Music. In addition to her vocal training, Ms. Marrero has trained in ballet for 10 years, jazz dance for 13 years, and Latin dance since birth.