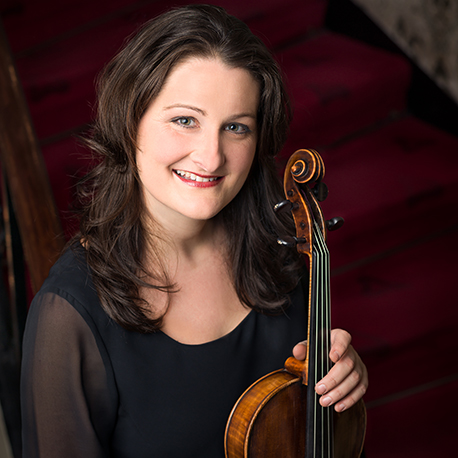 A native of Quèbec City, Canada, Marylène Gingras-Roy joined the Pittsburgh Symphony Orchestra viola section in the 1997 season, and in 2004 was promoted to fourth chair.

She studied at the Conservatoire de Musique de Quèbec with Douglas McNabney and François Paradis and graduated in 1993 with unanimous First Prizes in both viola and chamber music. She was the recipient of Canada and Quèbec Arts Councils’ Scholarship Grants, enabling her to attend the Harid Conservatory, where she studied with Victoria Chiang, and then at the renowned Curtis Institute of Music with Karen Tuttle and Joseph DePasquale. She earned an Artist Diploma in 1997.

Gingras-Roy is adjunct professor of viola at Duquesne University and has a full private studio at home. She is also an orchestra coach for the Three River Young Peoples orchestra and the Pittsburgh Youth Symphony. A highly sought-after teacher and pedagogue, she has over twenty years of experience with students at various levels of experience and distinction.

She has been featured as a soloist with the Pittsburgh Symphony and the Duquesne University Orchestra and Symphonette and performs regularly in chamber music concerts.

She has participated in many festivals, including the Festival Dei Due Mondi in Spoleto, Italy, the Solti Project at Carnegie Hall, the Jerusalem Music Festival, the Jeunesses Musicales World Orchestra (where she served as Principal violist), and since 2000 the Sun Valley Music Festival in Idaho.

Gingras-Roy’s recordings of chamber music include Leo Zeitlin’s Yedish songs and the Caprichos Nos. 2-4 by Leonardo Salada (world premiere recording) for the Naxos label. She has also recorded the Serenade no 6 for trombone, viola, and cello by Vincent Persichetti.

Gingras-Roy’s viola is made by Umberto Muschietti from Udine, Italy.