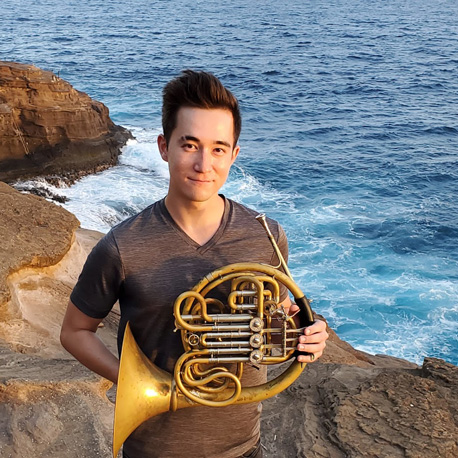 Born and raised in Honolulu, Hawaii, Markus Osterlund joined the National Symphony Orchestra in 2016 after holding and being offered positions with the San Antonio and Hawaii Symphonies. An avid traveler, he has also appeared onstage with the Philadelphia, Detroit, Houston, Atlanta, and Baltimore Symphonies. During the summer, he holds the associate principal and third horn position of the Britt Festival Orchestra in Jacksonville, Oregon, as well as serves as principal horn and instructor at the Pacific Music Institute in Honolulu, Hawaii. Further teaching engagements include the National Orchestral Institute, the Kennedy Center’s NSO Summer Music Institute and masterclasses at DC Horn Day and the University of Maryland’s Mus Ed clinics.

Markus holds a degree from both the Interlochen Arts Academy and from Rice University where he pursued artistic edification under Houston Symphony’s acclaimed horn pedagogue William VerMeulen. Recognitions include being chosen a Yamaha Young Performing Artist in 2013, 2nd prize at the 2017 International Horn Competition of America, 3rd prize at the International Horn Society’s 2014 Premier Soloist Competition in London, and the 2015 Fischoff Competition’s Bronze Medal as a member of the Prismatics Woodwind Quintet.

Since moving to DC, Markus has discovered an affinity for computers, web3, and adorable dachshunds.