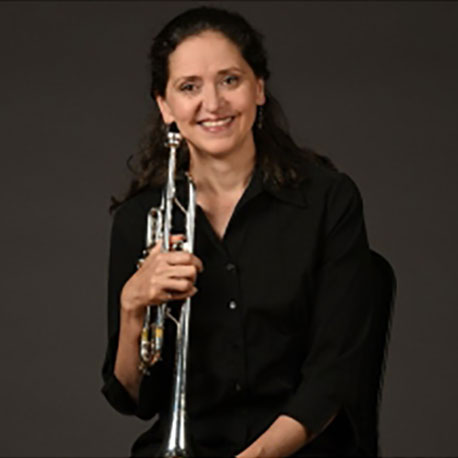 A native of Regina, Saskatchewan, Karen became hooked on the trumpet in her elementary school band program. While she displayed a natural ability for the instrument, she started her formal training much later at the University of Regina.

After completing her Bachelor of Arts in Music, Ms. Donnelly received a major bursary from the Saskatchewan Arts Board to continue studying at McGill University (Montreal) where she completed a Master’s of Music in 1991. While in Montreal, she quickly became one of the most sought-after trumpet players in the area, performing with premier ensembles such as the Montreal Symphony Orchestra, Les Violons du Roy and Les Grands Ballets Canadiens Orchestra.

From 1994-1996, Karen played with Orchestra London (Canada) as Principal Trumpet and performed with many ensembles in southwestern Ontario during this period.

Since her arrival in Ottawa, Karen has also kept a busy chamber music schedule performing many concerts for CBC (French and English) and with the Ottawa Chamber Music Festival. As a member of the Rideau Lakes Brass Quintet, she is very active in giving educational concerts and workshops in schools. Also a member of the large ensemble, Capital BrassWorks, Karen is very involved in the organization and presentation of this group’s highly successful concert series held in Ottawa. The Capital BrassWorks recently released its second CD featuring Ms. Donnelly as soloist.

Teaching continues to be an important part of her schedule. Through the NAC Music Education programs, Karen Donnelly has given master classes in Switzerland, Mexico, the United States and in Canada from coast to coast. She joined the teaching staff of the School of Music of the University of Ottawa in 2002.