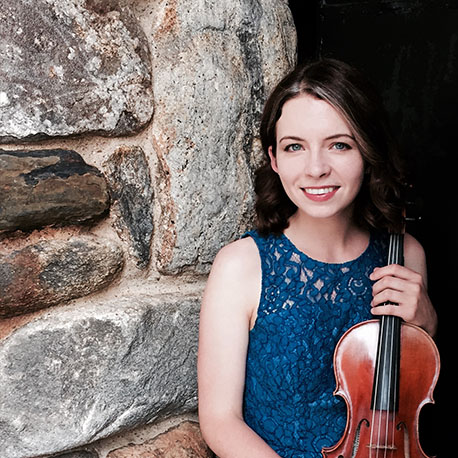 A native of Worcester, MA, violinist Julia Noone is the Assistant Concertmaster of the Louisville Orchestra and has recently performed with the Boston Symphony and the Royal Scottish National Orchestra. Before moving to Louisville, Julia was a fellow at the New World Symphony, where she was regularly Concertmaster and performed as soloist in Syzmanowski’s Second Concerto after winning the 2014/15 season concerto competition. Other recent solo engagements include a performance of the Tchaikovsky Concerto with La Academia Filarmonica de Medellín, Colombia.

Julia spent multiple summers performing with the Moritzburg Academy, the Schleswig-Holstein Musik Festival, and the Tanglewood Music Center, where she was awardedthe Jules C. Reiner violin prize and spent three summers performing as Concertmaster under such conductors as Rafael Frühbeck de Burgos and Andris Nelsons. Other summer festival engagements have included a performance as Concertmaster for the St. Matthew Passion with the Spoleto Festival, USA and a season as Assistant Concertmaster of Ash Lawn Opera in Charlottesville, VA.

An avid chamber musician, Julia’s recent engagements have included collaborations with the Palladium Chamber Players in St. Petersburg, FL and a performance of the Korngold Suite with pianist Orion Weiss. While at Tanglewood, Julia studied chamber music with Emanuel Ax, John Harbison, and Yo-Yo Ma. Julia attended the New England Conservatory, where she studied violin with Masuko Ushioda and chamber music with the Weilerstein Trio and Lucy Chapman.