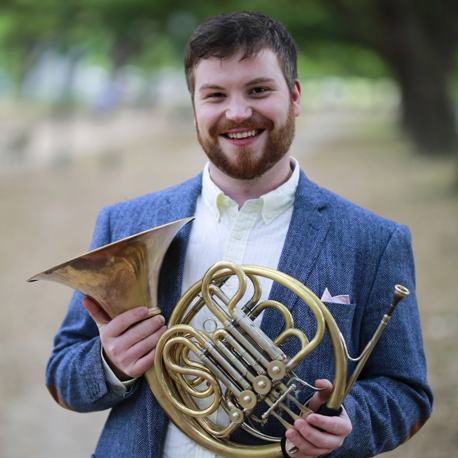 A Chicago Native, Jesse Clevenger comes from a musical family of horn players. In 2022, he will celebrate his fifth year as Assistant Principal hornist with both the Houston Symphony and the Sun Valley Music Festival. Additionally, he has appeared as a guest player with the Chicago Symphony, Dallas Symphony, Hong Kong Philharmonic, and as guest principal of the Toledo Symphony. He has participated in numerous festivals including Tanglewood, Spoleto, and Bravo! Vail.

He is eternally grateful to his parents, Alice Render and Dale Clevenger, who were his early instructors in both music and horn performance. He received a Bachelor of Music degree in Horn Performance from Indiana University with Jeff Nelsen and a Master of Music degree from Rice University’s Shepherd School of Music with William VerMeulen.

In his spare time, he likes to read chamber music with friends and take road trips with loved ones. When not in a whirlwind of music, Mr. Clevenger enjoys literature, studying Renaissance art and music, and walking his dog, Olive.