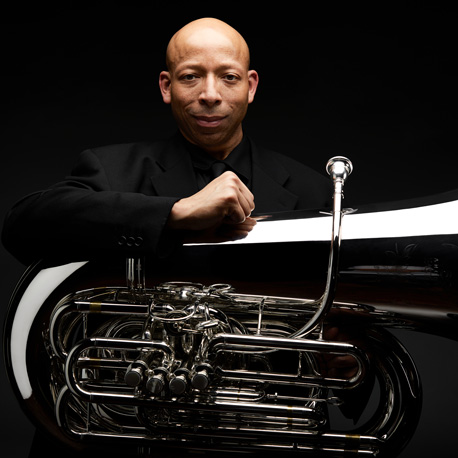 JáTtik Clark began his professional music career by securing the position of Principal Tuba with the Oregon Symphony in May of 1999, under the baton of James DePreist. In addition to the Oregon Symphony, JáTtik also currently serves as Co-Principal Tubist of the Grand Teton Music Festival and Principal Tubist of the Sunriver Music Festival. He has been invited to perform with many of the nation’s leading orchestras and symphonies, including Baltimore, Cincinnati, Chicago, Detroit, Grant Park, Philadelphia, Pittsburgh, San Diego, St. Louis, Seattle, Utah and, most recently, the LA Philharmonic.

JáTtik is also a founding and current member of the Rose City Brass Quintet, a professional chamber ensemble dedicated to performing challenging and engaging repertoire, which can be sampled on their recently released inaugural album, DisQuiet. He has also been featured and recorded as a solo artist on occasion. This includes several features with the Oregon Symphony over his tenure, with the latest being the West Coast premier of the Concerto for Tubist and Orchestra by Wynton Marsalis. JáTtik has also enjoyed multiple solo engagements with the Grand Teton Music Festival, the Vancouver Symphony (WA), the Portland Columbia Symphony, the Salem Chamber Orchestra, the Corvallis-OSU Symphony and OSU Wind Ensemble, and the “Pershing’s Own” United States Army Band in Washington D.C.