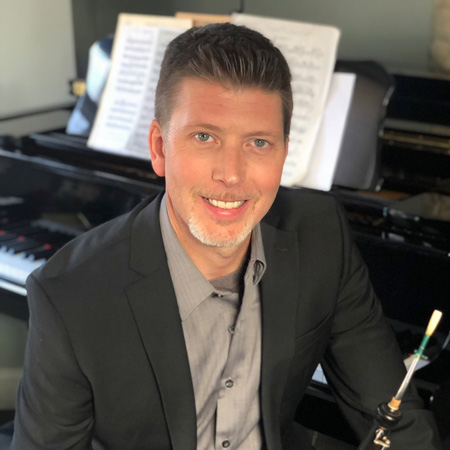 A native of Lubbock, TX, Jason Sudduth has served as Assistant Principal Oboe in the Omaha Symphony for the past four seasons. He moved to Nebraska with his wife Erica after a 5-year tenure in Hawaii as Solo English horn and third oboe with the Honolulu Symphony. Prior to his tenure in Hawaii, Jason was second oboist with the San Jose Symphony, and performed frequently with the San Francisco Symphony, Opera San Jose, and the San Francisco Opera. He has served as Principal Oboe of the Lubbock and Midland/Odessa Symphonies, in addition to appearing with the Houston Symphony, Houston Ballet, and San Antonio Symphony.  Jason received his Bachelor of Music degree with honors from Texas Tech University, and earned a Masters degree from Rice University’s Shepherd School of Music, where he studied with Houston Symphony principal oboist Robert Atherholt. He has participated in the Texas, Breckenridge, Carmel-Bach, Midsummer Mozart, Music in the Mountains, and Sun Valley (ID) festivals, as well as serving as Principal Oboe of the North Carolina School of the Arts’ Festival Orchestra on two of it’s summer European tours.  Jason is a passionate teacher and has taught oboe at San Jose State University, Santa Clara University, UC Santa Cruz, University of Hawaii, and the prestigious Punahou School in Honolulu. Jason currently has a successful studio of young oboists in Omaha, and loves spending time w/ his wife Erica and baby daughter Avery.