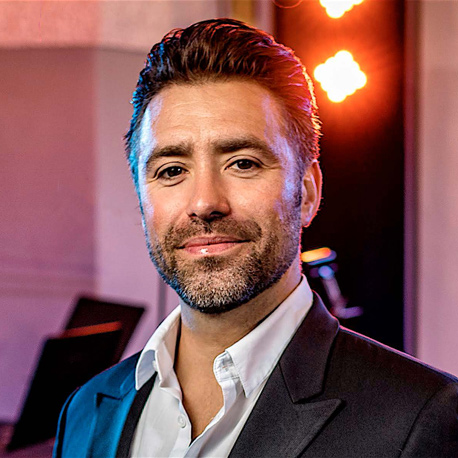 Portuguese-American conductor Jacomo Bairos continues to redefine what a conductor can be in the 21st Century. He challenges the preconceptions of orchestral repertoire, blurs the lines of genres, and integrates the orchestra into the broader community in new, holistic, and organic ways. He is the 17th Music Director for the Amarillo Symphony, Co-Founder and Artistic Director for Miami’s Nu Deco Ensemble, and performs regularly as a guest conductor with some of the world’s finest orchestras. Mr. Bairos’ performances have been described as:

and having a “splendid sense of musicality”
—Knoxville Mercury

In the 2019-20 season, Mr. Bairos makes debuts with the Seattle Symphony, the Cincinnati Pops, and returns to the Symphonies of San Francisco, Houston, and Atlanta, and the Sarasota Orchestra. He is in residency at the Peabody Institute for performances, masterclasses, and lectures this fall, and makes his Operatic debut this season with Britten’s Turn of the Screw in collaboration with Illuminarts Miami. In June, Mr. Bairos made highly successful debuts with the Boston Pops, returned to the Atlanta Symphony, and continued his relationship with the Sewanee Music Festival working with America’s premier young musicians.

Along with composer Sam Hyken, Mr. Bairos is Co-Founder and Artistic Director for Nu Deco Ensemble, which has exploded onto Miami’s eclectic music scene fusing innovative, genre-bending orchestral performances and collaborations with the highest levels of musical artistry. This year marks Mr. Bairos’ seventh season as the Amarillo Symphony’s 17th Music Director. His imaginative and inclusive tenure has fueled tremendous fiscal and artistic growth. He has overseen the creation of captivating outreach initiatives such as Class Act, SymphonyKids, and the Happy-Holiday Pops. He has also established the first-ever Composer-in-Residence with Chris Rogerson.

Mr. Bairos’ collaborators include renowned classical pianists Jeremy Denk, Garrick Ohlsson, and mezzo-soprano J’Nai Bridges, to name a few. He closely collaborates with today’s most groundbreaking artists such as Grammy-winners Jacob Collier, Angelique Kidjo, and Gregory Porter, as well as Kishi Bashi, Danay Suarez, Aaron Deihl, Cory Henry, and Jon Batiste. Since 2014, he has collaborated with multi-platinum singer-songwriter Ben Folds. Mr. Bairos’ musical mentors include the esteemed conducting pedagogue, Gustav Meier, distinguished Maestro Kurt Masur, and Robert Spano. He was awarded the prestigious Felix Mendelssohn-Bartholdy Scholarship by the US Mendelssohn Foundation and Kurt Masur and is a conducting alumnus of both the Peabody Institute and Aspen Music Festival. A graduate of The Juilliard School, Mr. Bairos is an accomplished and award-winning tubist, having given master classes and concerts with major festivals and orchestras around the world.

Born in Lisbon Portugal, Mr. Bairos is also a Yoga teacher, a practitioner of Vipassana Meditation, and works and mentors with underserved children throughout the South Florida and Panhandle-Texas region. He makes his home in Miami, FL.