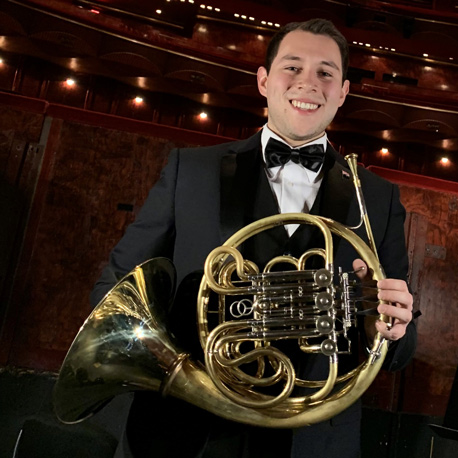 Hugo Valverde carries an orchestral and solo career in the United States and his native Costa Rica as a French horn player, currently holding the position of Second Horn with the Metropolitan Opera Orchestra since 2017.

In his role as a soloist he performed Richard Strauss’ Concerto No. 1 with the Lynn Philharmonia Orchestra under Guillermo Figueroa and he premiered the piece “Tributo al Ciudadano Pablo” by Marvin Camacho with the Heredia Symphony Orchestra of Costa Rica under Josué Jiménez. The piece is written and dedicated to him by the composer and it reflects Hugo Valverde’s commitment to Latin American repertoire, having performed and premiered in concert pieces by Manuel Matarrita, and other Latin American composers. He often performs chamber music concerts with his colleagues of the Metropolitan Opera Orchestra at the Carnegie Hall Concert (Met Orchestra Chamber Ensemble) at Weill Recital Hall, and also with the woodwind quintet “Quinteto de Luz” in Costa Rica.

A dedicated educator, Mr. Valverde has been involved in pedagogical programs in the United States and Latin America, giving masterclasses for the Orchestra of the Americas, Yale University School of Music, New York University, the University of Costa Rica, among others. During the pandemic he created the project “Lockdown Warmups”, which offered 40+ free masterclasses and warmup sessions from renown musicians from the Berlin, New York and LA Philharmonic Orchestras, Chicago Symphony Orchestra, Philadelphia Orchestra, MET Orchestra, Bavarian Radio Symphony, etc, for young Latin American horn players. He currently teaches at the Precollege Division at Manhattan School of Music.

Mr. Valverde studied at the Shepherd School of Music at Rice University, Lynn University Conservatory of Music and the National Music Institute of Costa Rica. His main teachers are Luis Murillo, Gregory Miller and William VerMeulen.

In his spare time, Hugo enjoys biking in Central Park and in his native Barva, in Costa Rica, and is a coffee lover.