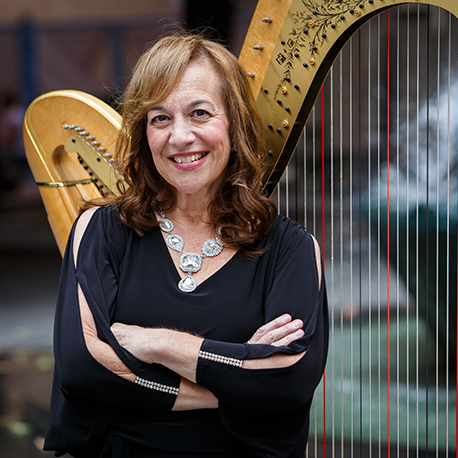 Gretchen Van Hoesen has been Principal Harpist of the Pittsburgh Symphony Orchestra since 1977 and has appeared as soloist with the orchestra on subscription concerts and on tour under conductors André Previn, Lorin Maazel, James Conlon, Zdnek Macal, Sergiu Comissiona, Pinchas Zukerman and Manfred Honeck. She has been active in the performance of new music, giving the New York and Pittsburgh premieres of Alberto Ginastera’s Harp Concerto, the Pittsburgh premiere of Witold Lutoslawski’s Double Concerto for Oboe, Harp and Chamber Orchestra with her husband, former Pittsburgh Symphony Orchestra Co-Principal Oboist James Gorton, the United States premiere of Suite Concertante for Solo Harp and Orchestra by Manuel Moreno-Buendia in San Antonio, Texas, the North American premiere of Concert Piece, Op. 65 for Oboe/English Horn, Two Harps and Orchestra by Eugene Goossens, and the world premiere of Sir André Previn’s Concerto for Harp. Gretchen Van Hoesen has concertized all over the world and was selected to perform in the Super World Orchestra 2000 in Japan, an ensemble made up of key musicians from around the globe. Gretchen Van Hoesen has worked with such maestros as Valery Gergiev, Sir Andrew Davis, Marek Janowski, Yan Pascal Tortelier, Rafael Frühbeck de Burgos, William Steinberg, Gianandrea Noseda and James Levine.  She has been a featured soloist at American Harp Society National Conferences in Boston, Pittsburgh, San Antonio, Denton, Washington, D.C. and Fredonia, and served as a judge for National Competitions of the American Harp Society and as President of the organization’s Pittsburgh Chapter. She has served on the faculty of the Aspen Music Festival, is a coach for the National Youth Orchestra of the USA, Pittsburgh Youth Symphony and Three Rivers Young Peoples’ Orchestra, and is Harp Forum Editor and clinician for the American String Teachers Association. Gretchen Van Hoesen graduated from the Juilliard School, where she earned bachelor’s and master’s degrees in harp as a scholarship student of Marcel Grandjany and Susann McDonald. She is also a graduate of the Eastman School of Music Preparatory Department with highest honors in piano and harp, where she was a student of Eileen Malone. She studied further with Gloria Agostini. Her recordings include Lullabies and Night Songs on the Caedmon label, Pavanes, Pastorales, and Serenades for Oboe and Harp, and Concertos for Harp and Orchestra, both on Boston Records, Breath of Heaven, A Christmas Collection with soprano Sarah Botkin, Trio Pittsburgh with violinist Noah Bendix-Balgley and ‘cellist Anne Martindale Williams, Genetic Harps with Heidi Van Hoesen Gorton, and Romances for Violin and Harp with violinist Andres Cardenes. Ms. Van Hoesen is a faculty member of Carnegie Mellon and Duquesne universities and also maintains a private teaching studio at her home in Pittsburgh.