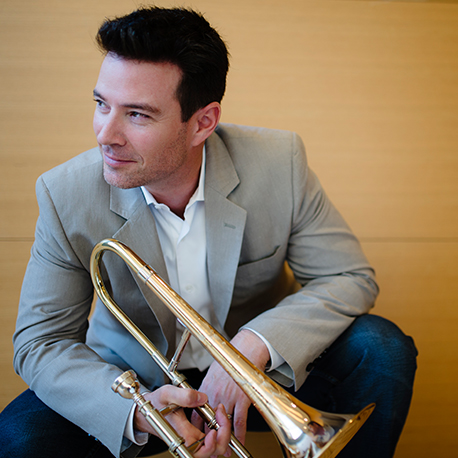 Gordon Wolfe has been a member of the Toronto Symphony Orchestra since 2001, taking over the role of Principal Trombone in 2006.  He was previously a member of the Winnipeg and Victoria Symphony Orchestras, and has also had the privilege of performing recently with the Los Angeles Philharmonic, the Atlanta Symphony, the St. Paul Chamber Orchestra and the National Arts Centre Orchestra. Gordon studied with Canadian trombone icons Ian McDougall, Thomas Eadie, and Peter Sullivan at the University of Victoria and McGill University while working through his Bachelor and Master’s degrees in music.

An accomplished chamber musician, Gordon was a founding member of the Central Park Brass, a privately funded brass quintet that is dedicated to performing free concerts for young people in the playgrounds of Central Park, and working regularly with under privileged children in the Union Settlements of the Bronx. In Toronto, he performs frequent recitals with BATSO (Brass Artists of the Toronto Symphony Orchestra) as part of the Royal Conservatory of Music’s Great Artist Series, and has performed for thousands of young students across Ontario as an ambassador of the Toronto Symphony’s Preludes programme.

In demand as a soloist, Gordon has recently been featured with the Toronto Symphony Orchestra, Orchestra Toronto, the Hannaford Street Silver Band and the Idaho State Wind Ensemble. As a highly respected educator, Gordon draws top students from across Canada to his trombone studio at the Royal Conservatory of Music’s Glenn Gould School.