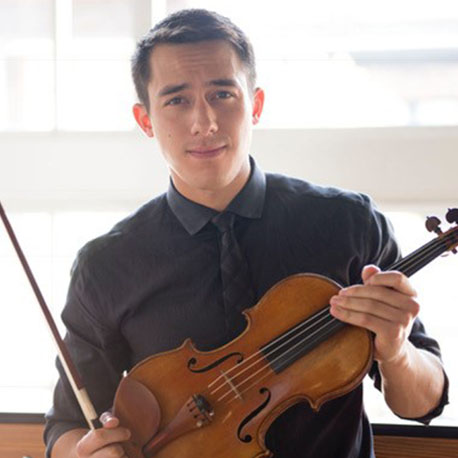 Gabriel Lefkowitz is the newly appointed concertmaster of the Louisville Orchestra, with whom he has just completed his first season. A versatile musician of the 21st century, he is also a conductor and a composer for films and video games.

During the 2016-2017 season (concurrent with his position in Louisville), Gabriel completed a 6 year tenure as concertmaster of the Knoxville Symphony Orchestra. In addition to his orchestral positions, Gabriel is an active soloist, recently performing the concerti of Brahms (Knoxville, TN), Philip Glass (Ocala, FL), and Mozart (Oak Ridge, TN), and will perform as soloist in the Tchaikovsky Violin Concerto with the Louisville Orchestra this upcoming season. Gabriel is a frequent recitalist, having founded the series Gabriel Lefkowitz & Friends in Knoxville, in which he performed 16 distinct recital programs during his KSO tenure.

An active conductor, Gabriel made his conducting debut with the Knoxville Symphony Orchestra during the 2015-2016 season in the form of several light classical & pops “runout” performances at venues throughout Knoxville and East Tennessee. He served as Music Director of the Oak Ridge Community Orchestra during the 2014-2015 season, and has worked extensively with youth ensembles including the Knoxville Symphony Youth Orchestra, the Juilliard Pre-College Orchestra, and the Boston Youth Symphony.

Gabriel holds a bachelor’s degree from Columbia University and earned a master’s degree at the Juilliard School where he studied with Joel Smirnoff and Masao Kawasaki.