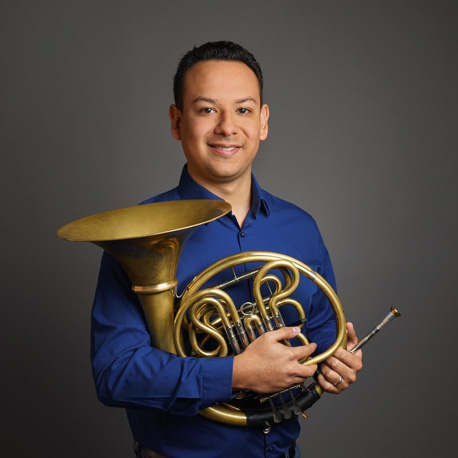 Mexican-born hornist Ernesto Tovar Torres is the Fourth horn of The Philadelphia Orchestra and is in high demand as an orchestral and chamber musician. He served as second horn for the Atlanta Symphony for two seasons, from 2015 to 2017.
Mr. Tovar has also performed with the Dallas Symphony, the Naples Philharmonic, the Bellingham Festival Orchestra (WA), the Steamboat Springs Strings Festival (CO), and the Grand Rapids Symphony.
Major music festival engagements include the Eastern Music Festival (NC), the Texas Music Festival, the Banff Master Class for Strings and Winds, and Spoleto USA. Mr. Tovar was also a finalist in the 2013 International Horn Competition of America, where he performed the Glière Horn Concerto.
Mr. Tovar, along with Jennifer Montone, Principal Horn of the Philadelphia Orchestra, co-founded a non-profit organization called One World Horn, which aims to uplift talented young Hispanic and African-American horn students. He also serves as faculty (Artist-in-Residence) at Temple University’s Boyer College of Music and Dance. He received his training at Rice University’s Shepherd School of Music, where he studied with William VerMeulen, international horn soloist and principal horn of the Houston Symphony. He holds a bachelor’s degree in horn performance from Oklahoma State University where he studied with Lanette Lopez-Compton and graduated with honors in May 2014.

Mr. Tovar currently resides in Philadelphia with his wife, Martha Meek, and their three dogs: Cleopatra, Samantha, and Francis. Together they enjoy walks in the park, cooking fine Mexican cuisine, and traveling (when they can find a dog sitter).