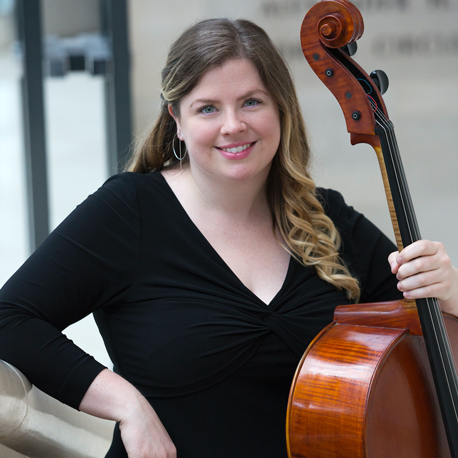 Cellist Emileigh Brooke Vandiver brings people together through the humanity of music, cello in tow. Described by the Boston Musical Intelligencer as a musician who conveys “a world of emotional meaning to the cello,” Ms. Vandiver’s performances, teaching, and community engagement reflect her desire to reverse the current trend of social isolation and reconnect people across cultures.

Reviewed by the New York Times as an “excellent performer,” Ms. Vandiver is a versatile musician who has performed with various orchestras across the globe. The 2021-2022 season marked her debut as Associate Principal with the Fort Worth Symphony. During the summer months, she enjoys playing with the Sun Valley Music Festival and Artosphere Festival Orchestra. Previously, she held positions with the Houston Symphony, Dallas Symphony, and Calgary Philharmonic Orchestra. Additional ensemble experiences include touring and/or performing with the Baltimore Symphony, the Grant Park Orchestra, the Boston Lyric Opera, and A Far Cry.

Committed to the sustainability of her art form, Ms. Vandiver is a noted interpreter and advocate of new music. She was the principal cellist in the 21st Century Contemporary Ensemble, part of Carnegie Hall’s professional workshops, directed by John Adams and David Robertson. Ms. Vandiver draws inspiration from and has worked closely with Steve Reich, David Lang, John Adams, Michael Gordon, Andrew Norman, Hans Zender, Robert Honstein, Gunther Schuller, Vinko Globokar, John Heiss, and Julia Wolfe. She has also performed at June in Buffalo with Ensemble Signal and in the Bang on a Can marathon.

Ms. Vandiver completed her Bachelor and Master of Music degrees and Graduate Diploma at the New England Conservatory and, upon graduation, received the Gunther Schuller President’s Medal. She studied with Paul Katz, Natasha Brofsky, and John Heiss. Her pre-college teachers include Richard Aaron, Hans Jørgen-Jensen, Christopher French, and Ann Victor.

She is featured as a principal character in the cello documentary, Talent Has Hunger, and was subsequently praised by the Hollywood Reporter for making the “most vivid impression.” Additionally, she is a contributor to www.CelloBello.com. Ms. Vandiver is currently writing two solfege textbooks and a cello method book. In her spare time, she loves to enjoy the outdoors with her dog, Olive, takes Pilates classes, and designs her own gowns and jewelry.