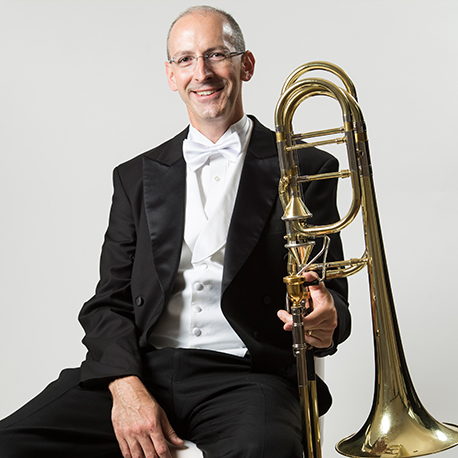 Darren McHenry joined the Dallas Symphony Orchestra as the bass trombonist in 1995, under the baton of Andrew Litton. He received his bachelor’s degree in music from Southern Methodist University and his master’s degree from The Juilliard School. His principal teachers include John Kitzman (Dallas Symphony Orchestra) and Don Harwood (New York Philharmonic). He has toured with the American/Soviet Youth Orchestra and the New York Philharmonic, and has performed with the Atlanta Symphony Orchestra. He has also taught at the University of Texas at Arlington and at the University of North Texas.  Darren has participated in music festivals with the National Orchestral Institute and Brevard Music Center.  For over a decade, Darren has performed in the Sun Valley Music Festival in Idaho with his wife Jenny and his two sons Bryce and Grant.  The entire family enjoys the fantastic summer weather and the scenic hikes all throughout central Idaho.