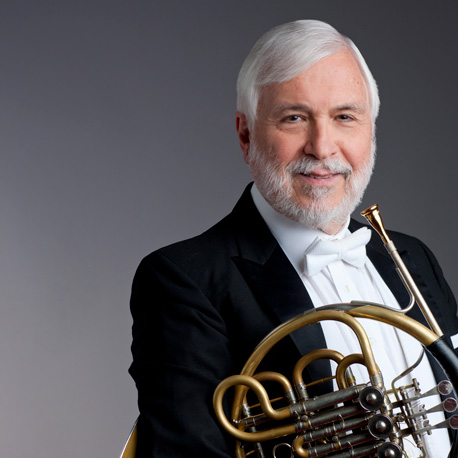 Dale Clevenger is professor of practice (horn) at the Indiana University Jacobs School of Music. He was previously professor of horn at Roosevelt University.

Principal horn of the Chicago Symphony Orchestra from 1966 to 2013, Clevenger is a versatile musician in many areas, including chamber music, jazz, commercial recordings, and solos. His mentors were Arnold Jacobs and Adolph Herseth.

Before joining the Chicago Symphony, Clevenger was a member of Leopold Stokowski’s American Symphony Orchestra and the Symphony of the Air directed by Alfred Wallenstein; he also was principal horn of the Kansas City Philharmonic. He has appeared as soloist with orchestras worldwide, including the Berlin Philharmonic Orchestra under Daniel Barenboim.

Clevenger is the featured soloist on several Chicago Symphony recordings, including works by Martin, Schumann, Britten, and Mozart. He also played on the Grammy Award-winning recording The Antiphonal Music of Gabrieli with the brass ensembles of the Chicago, Philadelphia, and Cleveland orchestras. He has recorded the horn concertos by Joseph and Michael Haydn with the Franz Liszt Chamber Orchestra of Budapest, as well as all of Mozart’s horn concertos. The Mozart recording was named Record of the Year in Hungary, and both recordings were nominated for Grammy Awards.

For 17 years, Clevenger played almost regularly with the group EARS, Jazz of All Eras. In 1985, he earned an honorary doctorate from Elmhurst College.

Clevenger and his wife, Giovanna, divide their time between Bloomington, Indiana, and their home in Italy, where they have, at present, six dogs and three cats.