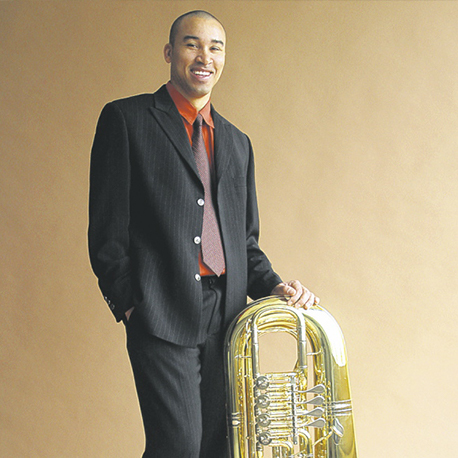 A native of Toronto, Chris began playing tuba at the age of twelve at Winona Drive Senior Public School and instantly discovered a passion for performing.  During his time at Winona, Chris met Chuck Daellenbach of the Canadian Brass, and performed over 50 concerts with the Winona Brass Quintet including a tour of Japan. Chuck would serve as a role model and mentor for the remainder of Chris’ career and those early musical experiences with the quintet would leave an indelible imprint on him.

Chris has been an active teacher and enjoys sharing his passion for music.  While in Europe, Chris was the Professor of Tuba at the ESMAE School of Music in Porto, Portugal and is the former Instructor of Tuba at the University of Manitoba.  He is very proud of his former students who hold a variety of positions.

Chris has recorded with the Winnipeg Symphony, the Manitoba Chamber Orchestra, Real Philharmonic de Galicia, Montreal Symphony Orchestra, the Canadian Brass and numerous studio recordings in the US.  Chris has appeared as a soloist with a variety of ensembles including the Winnipeg Symphony, the University of Manitoba Wind Ensemble and the National Youth Band of Canada.  Chris gave the orchestral premiere of the Victor Davies Tuba Concerto in 2009 with the WSO and is always on the lookout to find new tuba repertoire to perform for Canadian audiences.  When he is not playing tuba, Chris enjoys running, playing golf and spending time with his wife, Desiree and their two kids; Evelyn and Keenan.