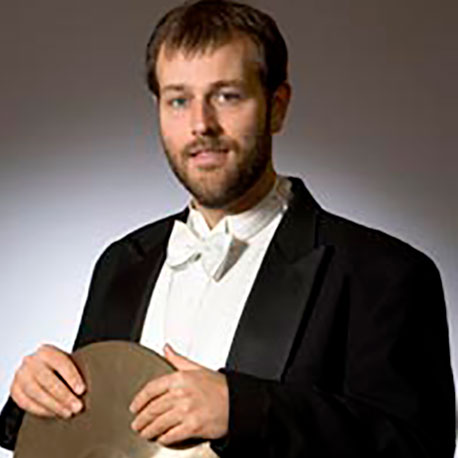 Charles Settle joined the percussion section of the Atlanta Symphony Orchestra at the beginning of the 2004-2005 season. During the 2015/2016 he is serving as Acting Principal Percussion. Prior to accepting the position in Atlanta, he was a member of the New World Symphony in Miami Beach, FL, from 2000-2004. During this time, he also performed as an extra percussionist with the Philadelphia Orchestra.During the 2008-2009 season, Mr. Settle took a one-year leave of absence from the Atlanta Symphony and joined the New York Philharmonic as
a Percussionist and Assistant Timpanist, where he toured, participated in recording projects,and performed with the Berlin Staatskapelle Orchestra during their residency at Carnegie Hall.

He also performs as a member of the Sun Valley Music Festival in Sun Valley, ID, and has performed with the Chicago Symphony, Cleveland Orchestra, Seattle and Toronto Symphonies and the Detroit Symphony Orchestra. An active educator, Mr. Settle has given master classes at the University of Miami (FL), DePaul University in Chicago, Manhattan School of Music, and The Curtis Institute of Music. He serves as an adjunct faculty member at Georgia State University, teaches privately out of his home in Atlanta, is a faculty member of the Atlanta Symphony Talent Development Program and coaches the Atlanta Symphony Youth Orchestra. He will make his debut solo appearance in September 2016 with the Atlanta Symphony Orchestra, Robert Spano conducting, in Avner Dorman’s Spices Perfume and Toxins. Mr. Settle graduated high school from the Interlochen Arts Academy and received his Bachelor of Music degree from the Curtis Institute of Music, where he studied with Michael Bookspan and Don Liuzzi. He also serves as an Artist and Clinician for Zildjian Cymbals and Freer Percussion products.