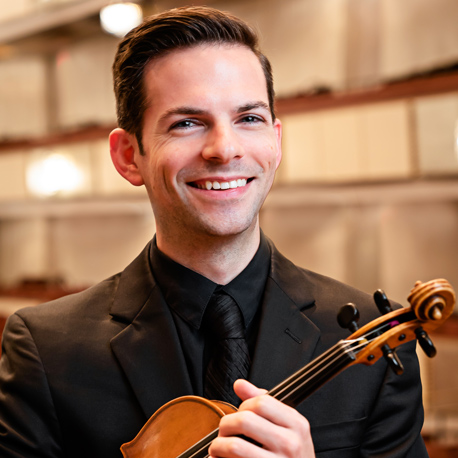 Violinist Benjamin Scott joined the National Symphony Orchestra in 2018 after enjoying a dynamic freelance career. As a frequent substitute with The Philadelphia Orchestra and Pittsburgh Symphony, he enjoyed unique experiences including tours in Europe and Asia, recording albums, and performing for Pope Francis at the World Meeting of Families in 2015. Scott has performed throughout the world with the Verbier Festival Orchestra, New World Symphony, Pacific Music Festival, Star Wars “In Concert” Symphony, and on tour with Branford Marsalis. In addition to performing with pop artists such as Steven Tyler, Aretha Franklin, Maxwell, and Gregory Porter, Scott has recorded music for use at Super Bowls XLVII to LII.

Scott values the many ways that music has a positive effect on the community. He has performed chamber concerts to benefit organizations with missions of inclusivity, such as Encircle and the Boulanger Initiative. He also participates in concerts that bring music to different neighborhoods in the District of Columbia, curates music therapy sessions in partnership with the Levine School of Music, and volunteers with Musicians on Call.

When he isn’t playing his 2016 Guadagnini copy by Samuel Payton, learning to cook new cuisines, biking, or playing with his cat, Scott loves to explore new corners of the world with his wife, and is excited to spend the summer in Idaho!