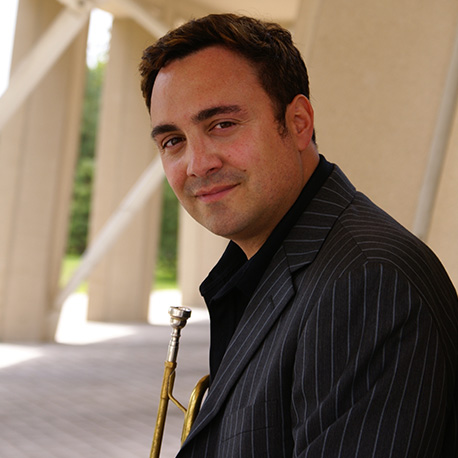 Anthony DiLorenzo, trumpet, has appeared as soloist with the Boston Symphony, Boston Pops, and New York Philharmonic, and has held positions with the Philadelphia Orchestra, New World Symphony, Santa Fe Opera, and Utah Symphony. Along with CCBQ trumpeter Geoffrey Hardcastle, Anthony is also a member of the Burning River Brass large brass ensemble, and Proteus 7, a mixed chamber ensemble.

A native of Stoughton, Massachusetts, he began trumpet studies with Peter Chapman and Roger Voisin, later receiving his Bachelor of Music degree from the Curtis Institute of Music. While a fellow at the Tanglewood Music Center, he worked with Leonard Bernstein who nominated him for an Avery Fisher Career Grant.

Anthony is also an Emmy Award-winning composer, whose works have been performed by the San Francisco Symphony, Colorado Symphony, Utah Symphony, and New World Symphony, and can be heard regularly on numerous American television networks (including the ABC College Football theme music). The CCBQ takes full advantage of Anthony’s composition talent, and regularly enlists him to write new music for the quintet. His original work “Firedance”, which the CCBQ premiered and recorded on its Street Song album, has become a favorite among student and professional brass quintets around the world.