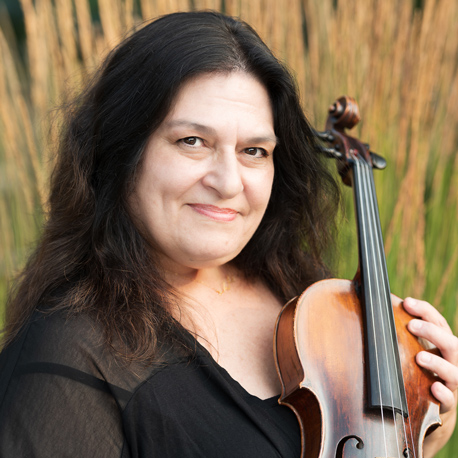 Violist Ann Roggen has been awarded grants from Chamber Music

America and the National Endowment for the Arts, and as a member of the Orchestra of St. Luke’s, has recorded extensively for the Telarc, Sony and Deutsche Gramaphone recording labels.

She maintains an active studio at William Paterson University where she is Professor of Viola, Chamber Music and Orchestral Studies, as well as in New York City where she teaches viola and chamber music. As a member of the Bennington College faculty, she has had great success in developing interdisciplinary cultural events designed to combine music with literature, history, dance and language in performance. Ann is a tireless advocate for unique and unusual repertoire for the viola in combination with other instruments and voice. In her role as Vice President of the New York Viola Society, she has been successful in creating numerous performance opportunities in New York City for dedicated violists to explore this repertoire, both old and new. In the fall of 2008, she was elected to the national board of the American Viola Society.

Some of Ann’s recent creations include “The Forbidden Music” of composers banned by the Nazis, an evening of music for multiple violas, with violists of the London Symphony Orchestra, concerts of viola music by film composers, as well as an event presented by the Pen and Brush organization devoted to the life and works of composer Rebecca Clarke.

Highlights of recent seasons include concerto performances with the Zagreb Chamber

Orchestra (Croatia), as well as recitals and master classes under the auspices of the American Cultural Centres in Zagreb and Vilnius, Lithuania.

Ann received her musical training at the Peabody Institute of Johns Hopkins University, and the Juilliard School. Her principal teachers and mentors have included Karen Tuttle, Lillian Fuchs, Joseph Fuchs and the Juilliard String Quartet.