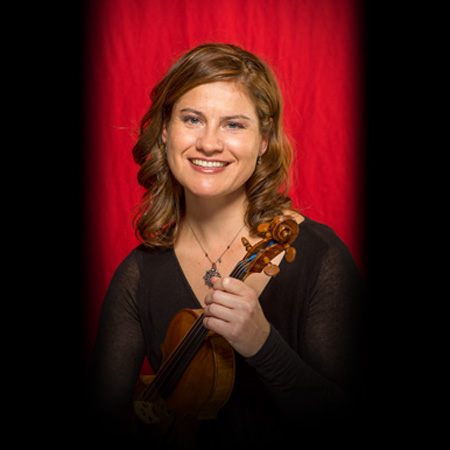 Angie Smart has been a First Violinist with the St. Louis Symphony Orchestra since 1998. Originally from England, she began violin lessons at the age of six, and at thirteen won a scholarship to attend Chetham’s School of Music in Manchester. She arrived in the U.S. in 1990 to continue her studies in music, completing her master’s degree at Rice University in Houston.

Smart has performed extensively in Europe and the U.S. and has appeared as a soloist with the SLSO several times, alongside conductors including Hans Vonk and Gemma New. These engagements have included Vivaldi’s The Four Seasons, Beethoven’s Romance No. 2, and Bruch’s Scottish Fantasy, to name a few.

An active chamber musician, Smart has performed works by composers including Philip Glass, Steve Reich, and John Adams, as part of the SLSO: Live at the Pulitzer series. She also performs frequently with the Missouri Chamber Music Festival and the Chamber Music Society of St. Louis.

Her television appearances have included master classes with Yehudi Menuhin and as the subject of a documentary profiling young musicians. Among other master classes, she has played for Midori and Zakhar Bron.

Smart competed in the 10th International Tchaikovsky Competition and the Yehudi Menuhin Competition. She has also been a prizewinner in many other competitions, including the British Violin Recital Prize, Elizabeth Harper Vaughan Concerto Competition, and the William C. Byrd Young Artists Competition.