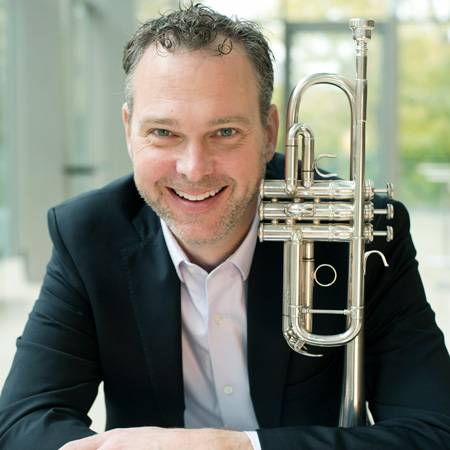 Andrew McCandless was appointed Principal Trumpet with the Toronto Symphony Orchestra in 1999 and has established himself as a prominent brass player in the orchestral world.  Since his first professional position at the age of 20 with the Savannah Symphony, Andrew has also held the position of Principal Trumpet with many notable orchestras including the Buffalo Philharmonic Orchestra and Dallas Symphony Orchestra.  In 2010, Andrew performed the world premiere of Songs of the Paradise Saloon, a trumpet concerto written specifically for him by Vancouver Symphony Orchestra Music Director Bramwell Tovey, and commissioned by the Toronto Symphony Orchestra. Andrew began playing the trumpet at the age of nine while studying at the Youth Performing Arts School in his native Louisville, Kentucky.  He continued his studies at Boston University and the Eastman School of Music.  As a junior in college, Andrew began playing with the Savannah Symphony as Co-Principal Trumpet.  In addition to his performing career, he is very involved with classical music education.  He is on faculty at The Royal Conservatory of Music, teaches privately, and has given master classes throughout North America, including at the Eastman School of Music, University of Calgary, University of Toronto and Northwestern University.