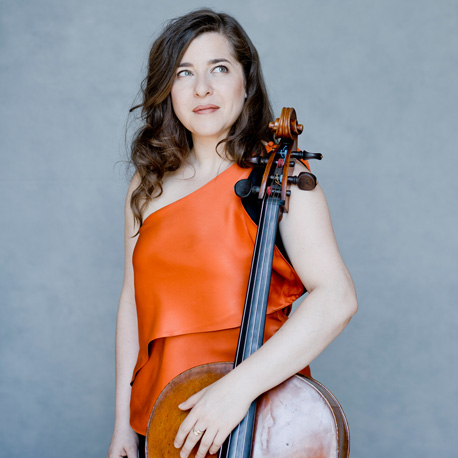 Alisa Weilerstein is known for her consummate artistry, emotional investment, and rare interpretive depth. Bach’s six suites for unaccompanied cello figure prominently in her current programming. Her recording of the complete set is a Billboard bestseller. Captured in Vox’s YouTube series, her insights into Bach’s first G-major prelude have been viewed over 1.5 million times. She has chronicled her developing engagement with the suites by streaming a new movement each day in her #36DaysOfBach project.

Mrs. Weilerstein has premiered and reprised works by Pascal Dusapin and Matthias Pintscher. She has worked extensively with Osvaldo Golijov, who rewrote Azul for cello and orchestra for her. Joseph Hallman has also written compositions for her and she premiered Lera Auerbach’s 24 Preludes for Cello and Piano with the composer at the keyboard.

Mrs. Weilerstein’s celebrated discography includes Transfigured Night, Solo, and a debut duo album in 2015 with Barnatan. She revisits the centerpiece from her album Solo on the soundtrack of If I Stay, a 2014 feature film in which the cellist makes a cameo appearance.

In 2009, she was invited to a classical-music event at the White House, featuring student workshops and performances. A month later, Mrs. Weilerstein toured Venezuela with the Simón Bolívar Symphony Orchestra. She has made return visits to teach and perform with the orchestra’s El Sistema music-education program.

Mrs. Weilerstein discovered her love for the cello at age 2, when she had chicken pox and her grandmother assembled makeshift cereal-box instruments to entertain her. After persuading her parents to buy her a real cello at the age of 4, she gave her first public performance six months later.  Her professional concert debut came in 1995 with the Cleveland Orchestra. A graduate of the Young Artist Program at the Cleveland Institute of Music, where she studied with Richard Weiss, Mrs. Weilerstein also holds a degree in history from Columbia University.