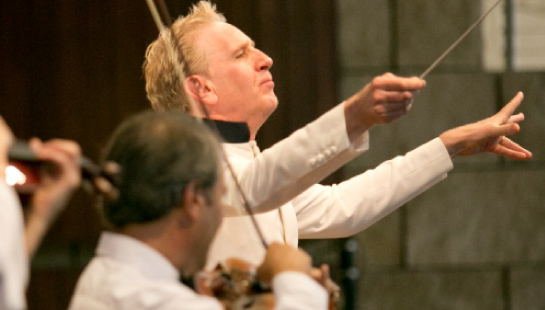 This February the Argyros will come alive in a new way with the excitement of classical music.

“We’re very excited to perform at the Argyros. We’ve designed the program to exploit the full capabilities of the state-of-the-art acoustics the Argyros will offer, and we hope it creates a new and different experience of classical music for our audience.”

The Festival begins with an invitation-only “Friends and Family Night” on Thursday, February 21. Public performances will be presented on Friday and Saturday night. The same program will be performed each evening.

“I don’t want to give up all our secrets, but I can tell you that you will see some familiar faces from the orchestra, and some new faces as well. You’ll likely be familiar with a couple of the pieces, but I’ve programmed one that I’m pretty sure almost no one will have heard. And for another, I’m putting pen to manuscript paper to create something pretty special!”

Aside from the performances, the Festival will also include several education events. Musicians and guest artists will spend time with students from the Symphony’s School of Music throughout the week, including classroom visits in Hailey. Additional student events on Friday and Saturday afternoons include a private concert and discussion, and a session focused on the technology behind the Festival.

While admission is free for the public performances, capacity will be limited; reservations are therefore strongly encouraged. Reservations may be made online at svsummersymphony.org beginning Monday, December 17 at 10:00 a.m. (MST). There is a limit of two seats per household. All reservations are general admission; please arrive early for the best seat selection.

Food and beverages will be available for purchase before and during the show and may be taken into the theatre. Each performance will include two intermissions and will end at approximately 8:45 p.m.