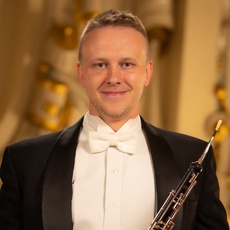 Kyle Mustain joins the Pittsburgh Symphony as its Principal English Horn in the 2019-20 season. He comes to Pittsburgh from the Oregon Symphony where he served in the same position since 2010.

Prior to joining the Oregon Symphony, Mustain spent two years living in Brazil, where he served as English horn soloist with the Orquestra Filarmônica de Minas Gerais; he held the same position with the Santa Fe Opera from 2004 to 2013. Mustain has performed with the Los Angeles Philharmonic and the Atlanta Symphony, and held one-year appointments as Assistant Principal Oboe and English Horn for both the Houston Symphony and Indianapolis Symphony. He spent several summers performing at the Verbier Festival in Switzerland, as well as the Santa Fe Chamber Music Festival.

Mustain has been a member of the band Pink Martini since 2014. When he is not cooking or painting or watching Prime Minister’s Questions, he might be found in the recording studio producing the next Pink Martini album, or onstage singing and playing English Horn with the globe-trotting band.