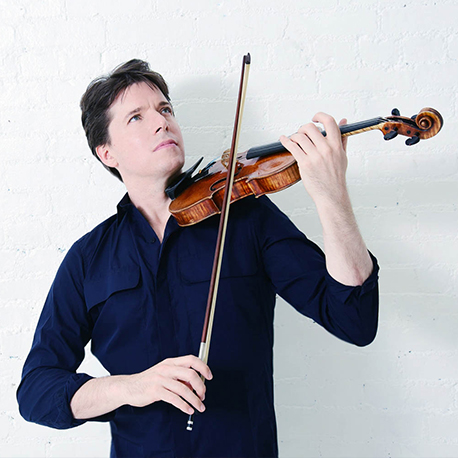 Celebrated violinist Joshua Bell has performed with virtually every major orchestra and has garnered awards for more than 40 albums. He continues to maintain engagements as a musician, conductor, and as Music Director of the Academy of St Martin in the Fields.

Mr. Bell has joined the movement to bring world-class performances online through appearances with soprano Larisa Martinez and pianist Daniil Trifonov and a PBS nationwide broadcast, among other performances. An interest in technology led to partnerships with Embertone on the Joshua Bell Virtual Violin and with Sony on the Joshua Bell VR Experience, and his Chopin Nocturne arrangement was the first-ever release on the Amazon Music Originals platform.

His history with the Academy of St Martin in the Fields dates back to a recording in 1986. Mr. Bell has since directed the orchestra on several award-winning albums, including his 2013 album, which debuted at No. 1 on the Billboard charts.

Mr. Bell has commissioned works by John Corigliano, Edgar Meyer, Behzad Ranjbaran, and Nicholas Maw. Collaborations with artists across a multitude of genres include a partnership with composer Corigliano on the soundtrack for The Red Violin, which helped Mr. Bell become a household name. In 2018-19, he commemorated the film’s 20th anniversary at festivals and with the New York Philharmonic. He also joined cellist Steven Isserlis and pianist Jeremy Benk for an American tour.

Mr. Bell maintains active involvement with Education Through Music and Turnaround Arts. He has mentored and performed alongside National YoungArts Foundation musicians. He also joined the President’s Committee on the Arts and Humanities’s first cultural mission to Cuba. A PBS special, “Joshua Bell’s Seasons of Cuba,” celebrates renewed cultural diplomacy between Cuba and the United States.

Born in Bloomington, Indiana, Mr. Bell began the violin at age 4 and, at age 12, began studies with Josef Gingold. At 14, Mr. Bell debuted with the Philadelphia Orchestra. At 18, he signed with his first label.