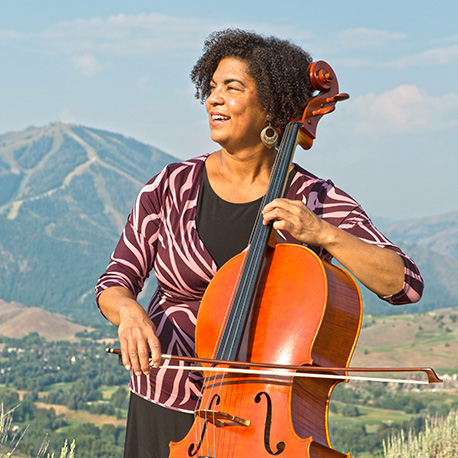 Ellen Sanders is a cellist, teacher and conductor who lives and plays in Oakland, CA and the Bay Area. She is Principal Cello of Santa Cruz Symphony, Assistant Principal Cello of Opera San Jose and a regular member of the San Jose Chamber Orchestra and an extra musician for the San Francisco Opera. Ms. Sanders is a teaching artist for the San Francisco Symphony’s Education Department where she weekly visits middle and high school music classes to coach cello sections and chamber music groups. In 2015/2016 she joined H.O.U.S.E. (Home of United String Ensembles) – a program that brings professional musicians to public schools to coach string music students in Oakland. For 2014/15 she was Assistant Conductor of The Community Women’s Orchestra (Oakland, CA) where she premiered the first movement of the “Concerto for 4 Bassoons” by Junio Bonacich. Ms. Sanders has been a member of the Sun Valley Music Festival cello section since 1992. Ellen has coached for the Sun Valley Music Festival’s Summer Music Workshops from the start and will conduct its Philharmonia Orchestra for an 11th summer in 2016. Ms. Sanders is a graduate of Oberlin College and the San Francisco Conservatory of Music. She has been seen hiking her doggie girl, Toni, in the regional parks of Oakland and surfing the waters of Santa Cruz.