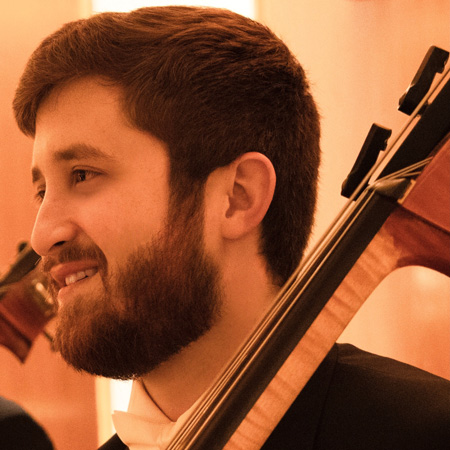 Fitzgerald began his musical studies in elementary school on piano and trumpet before discovering the electric bass in eighth grade. He played in multiple punk, metal, and acoustic folk bands before deciding to devote himself more fully to the study of orchestral literature, studying with Travis Gore, a current member of the Seattle Symphony. After some time in the San Diego Youth Symphony, he attended Interlochen Arts Academy as a senior, before pursuing a Bachelor’s degree in Double Bass Performance at Northwestern University. In 2012, he enjoyed a revelatory summer at Domaine Forget, where he worked closely with renowned pedagogues Paul Ellison and David Allen Moore. He then attended the Aspen Music Festival in 2016 and 2017 as a fellowship recipient, performing alongside members of the Pittsburgh, Dallas, St. Louis, and San Francisco symphonies.

Fitzgerald’s strongest influence and mentor is his undergraduate teacher, Northwestern University bass professor Andy Raciti, with whom he had the honor to perform alongside as a frequent substitute musician with the Milwaukee Symphony Orchestra.