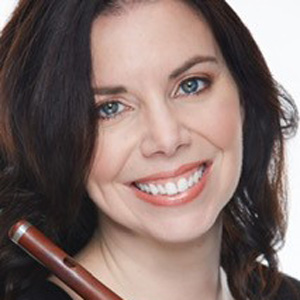 Amy Taylor is the Piccoloist of the San Diego Symphony Orchestra. Prior to
joining the SDSO, she served for 7 years as the Acting Second Flutist of the
Cincinnati Symphony Orchestra. She was also a member of the Milwaukee
Symphony Orchestra and the Honolulu Symphony Orchestra as Piccolo and
Associate Principal Flute, respectively.
Ms. Taylor is also a regular substitute with the Chicago Symphony Orchestra
including tours to Asia and Carnegie Hall. She has also played extensively with
the Detroit, Minnesota, Atlanta, and St. Louis Symphony Orchestras on both
piccolo and flute and was a member of the Civic Orchestra of Chicago.
Ms.Taylor, a Yamaha Artist, was a first place winner of the National Flute
Association Orchestral Excerpts Competition and the Oklahoma Young Artist
Competition. In 2006, she performed as a soloist with Yo-Yo Ma in Grant Park as
part of the Silk Road Ensemble. She has also had the privilege to perform during
summer months with the Sitka Summer Music Festival, Chautauqua Symphony
Orchestra and the Bellingham Music Festival.
In addition to her active performing career, Ms. Taylor is a devoted teacher. She
has held teaching positions at both Cincinnati College-Conservatory of Music and
Northern Kentucky University and is currently an adjunct Flute and Piccolo
Instructor at the University of North Texas and Xavier University.
Originally from the Dallas area, she received her BM from the University of North
Texas and her MM from Northwestern University. Her primary teachers include,
Walfrid Kujala, Terri Sundberg, Jennifer Gunn and Mathieu Dufour.